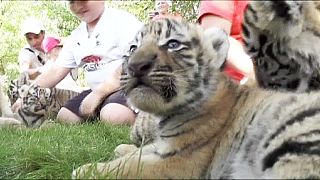 More than a dozen rare white lion and Siberian tiger cubs were let loose to frolic and play with delighted visitors at a safari park in Crimea’s Belogorsk town, as part of a local campaign to raise awareness about the protection of wild animals. Siberian tiger cubs, also known as Amur tigers or Ussuri tigers, are the world’s northernmost tiger species. At the beginning of the 20th century the population of the Siberian tigers was declining with just dozens of animals inhabiting the Russian Far East. By 2015, the population increased to about 500, but scientists still consider the species endangered.